The Anglo-Saxon treasures unearthed at Sutton Hoo have been described as one of “greatest archaeological discoveries of all time”. This discovery has been turned into Netflix film The Dig starring Carey Mulligan and Ralph Fiennes. But what is the story behind the finds?

image captionThe remains of the Sutton Hoo warrior’s helmet, with the surviving pieces mounted on a model showing its complete shape, are at the British Museum in London

The extraordinary ship burial was discovered just as World War Two was breaking out in 1939. Widowed landowner Edith Pretty had called in local archaeologist Basil Brown to investigate a series of mysterious earth mounds on her estate on the Deben estuary, near Woodbridge in Suffolk.

He discovered a royal burial chamber, which included a warrior’s helmet, a gold belt buckle, sword and shield, believed to have belonged to East Anglia’s 7th Century ruler King Rædwald.

Martin Carver, professor emeritus at the University of York and an expert on Sutton Hoo, told BBC History Magazine the ship was a “furnished mini-hall of the man lying in state”.

“He had his personal things with him in the coffin, and on top were his warrior’s uniform and his equipment for hosting a feast [in the afterlife],” he said.

image captionAn artist’s impression of the burial ship, which was 88ft long (27 metres)

The finds revealed the kingdom’s extensive trading links, not only with Scandinavia, but also with the Byzantine Empire (centred on Constantinople – modern-day Istanbul) and Egypt.

They revolutionised historians’ understanding of the 7th Century, previously seen as a backward time when England was divided into Anglo-Saxon kingdoms.

In all, there were 263 finds of gold, garnet, silver, bronze, enamel, iron, wood, bone, textile, feathers and fur.

Sue Brunning, from the British Museum in London, said: “The Sutton Hoo ship burial is one of the greatest archaeological discoveries of all time.”

Who was Edith Pretty?

Mrs Pretty had travelled extensively and seen excavations in the Nile Valley in Egypt.

Her father Robert Dempster, an amateur archaeologist, had revealed a Cistercian abbey in the grounds of his family home.

During World War One, she served behind the lines as a nurse and she bought the Sutton Hoo estate with her husband Frank when they got married in 1926.

Intrigued by the 18 low earth mounds at Sutton Hoo, she recruited Brown to begin their excavation in 1938, assisted by estate staff.

An inquest in 1939 declared the finds treasure belonging to Mrs Pretty and she promptly donated them to the British Museum.

The landowner, who is played by Carey Mulligan in the new drama, died in 1942 aged 59, leaving her 12-year-old son Robert who moved to Hampshire to live with an aunt.

Who was Basil Brown?

image captionBasil Brown was an archaeologist who worked for Ipswich Museum

When Pretty decided to excavate the site she was advised by Ipswich Museum to recruit the self-taught Suffolk archaeologist Basil Brown.

His archive – which was donated to Ipswich Museum by his widow and is now stored at the Suffolk Record Office – reveals he had conducted dozens of digs around the county.

Brown, who is portrayed by Fiennes in The Dig, focused on three of the mounds, cutting a trench across them and looking for a difference in soil colour which would indicate the presence of an in-filled chamber or grave.

The first dig season revealed signs the mounds has been robbed centuries earlier, but there was just enough evidence for a second excavation to be planned at another mound.

image captionThe hull of the ship had rotted, leaving only the metal bolts and the impression left in the earth by the wooden timbers

It was in the summer of 1939, just ahead of the British declaration of war on 3 September, that he found iron rivets from the hull of a 88ft-long (27 metre) Anglo-Saxon ship, one of only three Anglo-Saxon ship burials in England.

He wrote regular letters to his wife at home in Rickinghall from the dig, one of which described the ship burial as “a find of a lifetime”.

An excavation team led by Cambridge University archaeologist Charles Phillips took over at this stage.

The finds spent the war hidden in a disused London Underground tunnel and were first shown to the public in 1951.

What else has been discovered at Sutton Hoo?

Further excavations and analysis have uncovered more of the site’s secrets.

A dig from 1965 to 1971 solved the mystery of why no human remains were found in the ship.

Chemical analysis of the sand beneath the burial chamber revealed a body had decomposed there.

Brown’s belief that his initial finds in 1938 were of a rich ship burial which had been robbed was confirmed in excavations led by Prof Carver from 1983.

They also uncovered the burial of a high-status woman and the remains of a young warrior and his horse.

Prof Carver told BBC History magazine the “extravagant and very richly-furnished” pagan burials were probably in reaction to the spread of Christianity.

More gruesomely, the remains of people were detected as “ghosts” in the sand – human forms highlighted by areas of harder, darker sand, with evidence that legs and ankles had been bound and necks broken.

Why does Sutton Hoo belong to the National Trust?

The house provided a home for Land Army girls during World War Two, who left their mark by adding graffiti to a fireplace.

The estate was eventually sold and its last private owners were the Tranmer family.

In 1998, the trustees of the Annie Tranmer Trust donated it to the National Trust and Sutton Hoo House was renamed Tranmer House.

The property received a £4m revamp in 2019, which includes a full-size sculpture of the ship and a 17-metre (56ft) observation tower.

A project to build a replica of the ship is under way in the nearby town of Woodbridge.

A film that ‘brings the story to life’

The Netflix film is based upon the 2008 novel The Dig by John Preston.

He was inspired by his aunt Peggy Piggott, played by Lily James, who was an archaeologist during the 1939 dig.

“My aunt Peggy found the first gold that was discovered in Sutton Hoo,” he said.

“It was only after her death that I learnt of her role.”

The relationship between Mrs Pretty and Mr Brown forms the backbone of the film.

Mulligan said she was drawn to the role because Mrs Pretty was “so beyond her time as a woman at the beginning of the 20th Century”.

The character of Mr Brown – who left school at 12 and was self-taught – appealed to Fiennes.

“Basil Brown was an extraordinary figure and a self-effacing man,” he said. 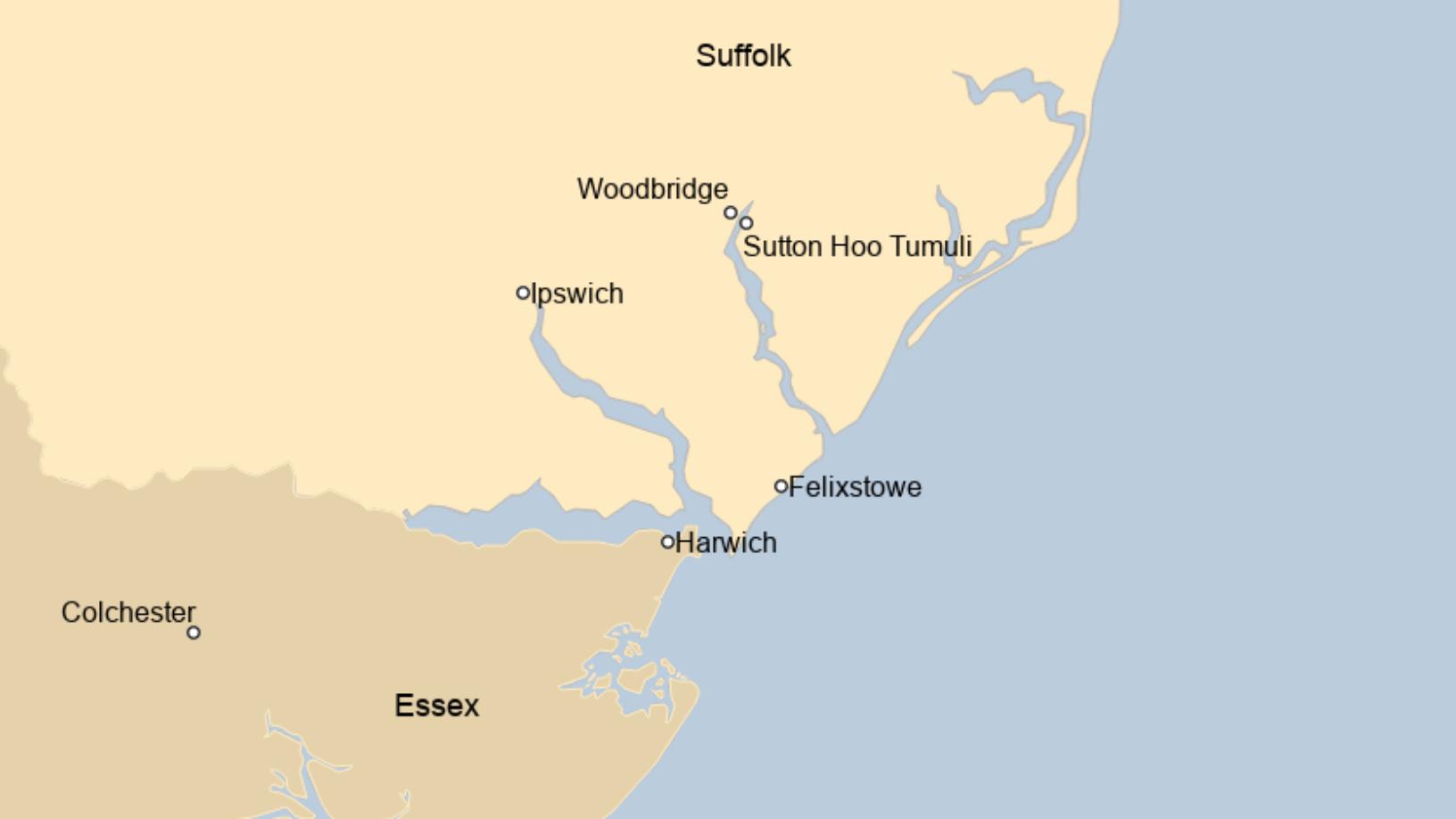 The Dig is on Netflix from 29 January.

Scroll for more
Tap
data-ad-format="auto">
The Papers: ‘Quarantine hotels’ and jab for over-18s ‘by June’
The Papers: ‘Hope in the post’ as ‘5 million more offered jab’
We use cookies to ensure that we give you the best experience on our website. If you continue to use this site we will assume that you are happy with it.Ok