Disabled train access: ‘I feel less human’ due to lack of lift

Disabled train access: ‘I feel less human’ due to lack of lift

A man with cerebral palsy has said he does “not feel human” due to not being able to get on trains.

Joshua Reeves, 23, is unable to access platforms at some stations across Wales, due to stairs and lack of access.

While improvements are being made, 21% of Welsh stations have no step-free access.

The Department for Transport said it wanted to improve rail infrastructure to make it more accessible.

All trains in the UK were meant to be fully accessible by January 2020, under new standards brought in under disability discrimination act.

But some carriages still do not conform with the law, and a number of stations have steep steps and no lifts or ramps for people to access platforms.

On Tuesday the UK government announced £20m towards improving accessibility at 124 stations across Britain – 119 of which are in England.

But, with just four Welsh stations, Grangetown, in Cardiff, Llantwit Major, in Vale of Glamorgan, Neath, in Neath Port Talbot, and Pontypool and New Inn, chosen, the Welsh Government has accused UK ministers of “underinvestment” in Wales.

One station, Anderston, was chosen for investment in Scotland.

‘I’m not asking for a hoverboard on my wheelchair’

When Joshua Reeves tried to catch a train to Cheltenham from his local station, Grangetown, he was faced with steep flight of stairs.

He looked around for another route, tried to find a lift to the platform, but was told there was no other way of accessing the station.

Under the UK funding, matched by the Welsh Government and the Cardiff Capital Region, Grangetown and the other three stations are set to get improvements by 2024, costing £1.5m in total.

“I do not know how long I have got to live and I want to see places,” he said.

“I’m not asking for a hoverboard on my wheelchair, I just want to be able to get on the train.”

According to a recent study by the House of Commons, 79% of stations in Wales are step free, above the UK average of 61%.

Mr Reeves said while some stations were described as accessible, in reality they were not due to location, or having a number of steps.

He said Ninian Park, the station for Cardiff City games, was “frightening” due to its steep hill, while Heath High Level, one station for the University Hospital of Wales, only has a ramp on one platform. 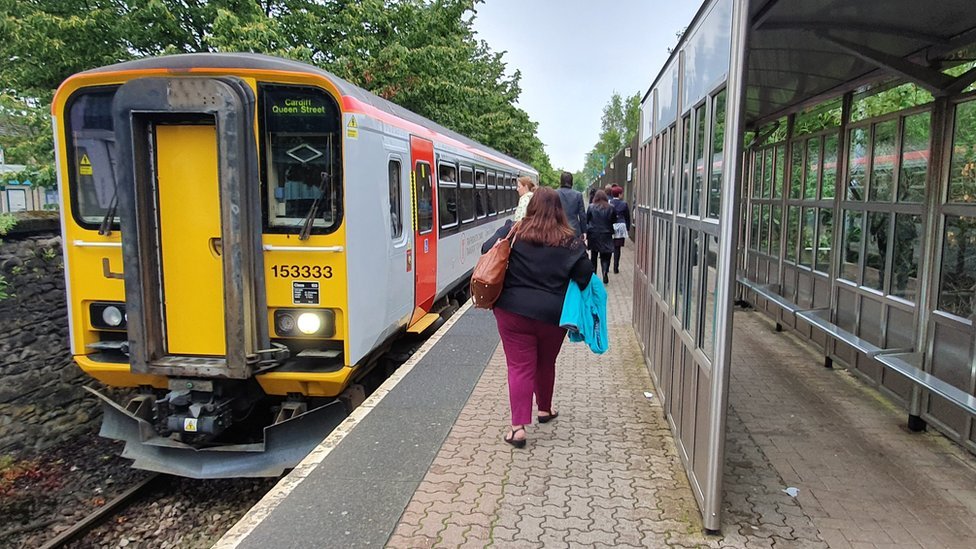 Currently rail companies offer free taxis or buses to take passengers to the nearest accessible station if they are unable to get off, but they have to give at least 24 hours notice.

Mr Reeves said he had missed meetings waiting for taxis to take him to his destination, after not being able to get off at the right station.

“People might think it is V.I.P. treatment, but it’s not, it’s terrifying, I feel like I’m being treated as a second class citizen,” he said.

“If it’s a lovely day, and I’ve got the day off work, I want to be able to just go somewhere, I just want to be spontaneous.”

Disability charity Leonard Cheshire has claimed all stations will not be step-free until 2070 if the current rate of enhancement work continues.

Rhian Stangroom-Teel, from the charity, said the accessibility had had years of “chronic underinvestment” and all rail journeys must be accessible in the next decade.

“Disabled people’s lives are being blighted by inaccessible local stations and trains not being fit for purpose,” she said.

The Welsh Government has responsibility for overseeing most rail services in Wales, but they have contracted this out to a private company.

But Network Rail, an arm’s length UK government body, is responsible for rail infrastructure, including stations.

The Welsh Government had applied for £1m of funding from the scheme to help make improvements at 30 other stations, including installing new ramps, tactile pavements for blind people and accessible toilets.

“Unfortunately it is another example where passengers are set to feel the effect of the UK government’s continuing underinvestment in Welsh railways.”

The Department for Transport said it wanted to improve vital railway infrastructure across Wales to make it more accessible.

“Successful projects were selected on meeting a range of criteria – including their ability to provide value for money to the taxpayer,” a spokeswoman added.

Network Rail said it was committed to improving accessibility at railway stations across Wales and the upgrade at Grangetown would bring “huge benefits to station users and open up travel opportunities for passengers”.

Scroll for more
Tap
data-ad-format="auto">
Knife offenders lack male role models, says senior police officer
Coronavirus: ‘I’ve been waiting four days for NHS 111 to call’
We use cookies to ensure that we give you the best experience on our website. If you continue to use this site we will assume that you are happy with it.Ok