Derek Chauvin trial: Why role of TV cameras could come into focus

Derek Chauvin trial: Why role of TV cameras could come into focus

From Monday, three discrete TV cameras will offer anyone with an internet connection a front-row seat to a criminal trial of global interest.

One of those cameras will be trained on Derek Chauvin, the former policeman accused of killing George Floyd in custody.

Mr Chauvin could be jailed for decades over the 25 May, 2020 death of Mr Floyd, an unarmed black man.

The knee Mr Chauvin placed on Mr Floyd’s neck was filmed for all to see.

Angered by what they saw, protesters worldwide said it was time to end racial injustice. Now cameras will let them see the justice system in real-time.

Never before has a judge allowed cameras to film a full criminal trial in the state of Minnesota.

This access was granted to Court TV, a US network best known for its slick yet lurid coverage of criminal cases in the 1990s. Its “gavel-to-gavel” footage will be shared with media outlets and broadcast live to audiences globally.

Every move Mr Chauvin makes, down to the faintest facial expression, will be open to public scrutiny. During the jury selection, which was also filmed live, a suited Mr Chauvin was seen day after day, listening intently and taking notes.

While not unusual in the US, that kind of transparency raises long-debated issues about the role of cameras in courtrooms.

There are two sides to this debate which both hinge on two fundamental tenets of the US constitution: the freedom of the press and the right to a fair trial.

Court TV believes its coverage of The People vs Derek Chauvin will uphold both of those constitutional rights.

“The death of George Floyd has galvanised people around this idea that there needs to be changes to the system,” Michael Ayala, a senior Court TV presenter, told the BBC.

“What cameras allow us to do is give people a window into the courtroom so they can see how the process works. Perhaps in that way it will give them some confidence in the system.”

This is one version of the argument made by Hennepin County District Judge Peter Cahill. He permitted filming of the trial in a landmark ruling last November. In that order, he cited intense public interest and Covid-19 limitations on courtroom access as his main reasons for overriding Minnesota’s restrictive policies on filming trials.

Still, the decision was challenged by the lead prosecutor, Attorney General Keith Ellison. He argued that televising the trial would compromise the privacy of witnesses, thus exposing them to intimidation and influencing the course of justice.

Media companies, and ultimately Judge Cahill, did not agree. Nor did Jane Kirtley, a professor of media ethics and law at the University of Minnesota.

“The vast majority of states allow cameras in courtrooms,” she told the BBC. “The criminal justice system has not collapsed as a result of this. As a matter of fact, I think public understanding has been heightened.”

Having relaunched under new ownership in 2019, Court TV sees the Chauvin trial as more than a throwback to those glory days.

“We’re advocating for more access so that people can watch their justice system work,” Grace Wong, Court TV’s director of field operations, told the BBC. “At a time when disinformation is so prevalent, transparency is the antidote.”

The Chauvin trial, she added, is “a return to our mission, our mission is to give people a front-row seat to justice”.

To sceptics of cameras in courts, this tagline strikes a familiar tone.

The trial of American football star OJ Simpson in the 1990s shows us why.

The OJ Simpson trial in Los Angeles was a watershed moment for TV court cases. While cameras had been in courtrooms since the 1980s in the US, the OJ trial gave birth to “a new kind of genre of television”, said Paul Thaler, a media scholar.

This was a trial that captivated a nation for eight months, courtesy of (you guessed it) Court TV. It had all the ingredients of a made-for-TV thriller – two grisly murders and a humbled celebrity in a city torn by racial strife.

Mr Thaler said television “impacted everything related to that trial”, which resulted in Simpson’s acquittal in 1995. 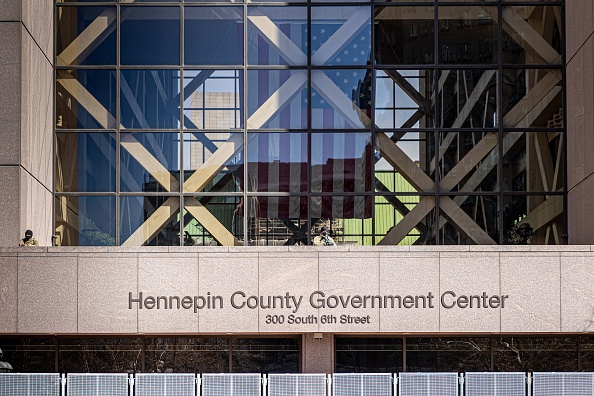 In any high-profile criminal trial, there is a court of law and a court of public opinion.

“These two merge during a televised case,” Mr Thaler, who wrote two books about cameras in courtrooms, told the BBC.

“Then there’s the question of how much public opinion comes into the courtroom, not only for the witnesses, but for the lawyers, the judge and the jury.

“If Court TV believes the massive publicity will have no impact on the [Chauvin] case, I think that’s naïve.”

There are notable differences between the OJ and Chauvin trials, of course. For a start, the cameras cannot zoom in or out on anyone in the courtroom. They can’t show Mr Floyd’s family, or any of the witnesses without their permission, either. Those restrictions will moderate the soap-opera instincts of Court TV, taking the emotional edge off its coverage.

But none of that matters to Mr Ayala. For him, the seriousness of the trial for race relations in the US will transcend the appetite for a spectacle.

“At the centre of it, race is the elephant in the room.”

Scroll for more
Tap
data-ad-format="auto">
Cured: How mental illness was used as a tool against LGBT rights
Deshaun Watson: Houston Texans quarterback being investigated by police amid 21 civil lawsuits
We use cookies to ensure that we give you the best experience on our website. If you continue to use this site we will assume that you are happy with it.Ok