There are fears the justice system could collapse as victims and defendants wait years for trials during the coronavirus pandemic.

While jury trials have resumed, a backlog of cases means some trials have been pushed back to 2023.

Now those representing victims and defendants in Wales have told the BBC trials could collapse due to the waits.

The UK government said it was investing record sums in justice, and opening temporary courts to clear cases.

By the end of February 2020, pre-Covid, the number of outstanding cases in crown court in England and Wales had reached 39,331, official figures show.

HM Courts and Tribunal Services (HMTS) said the number of cases being resolved in crown courts had trebled since lockdown in April, and it was investing £110m to boost capacity.

While criminal trials have resumed after the initial lockdown, those working in the courts say a lack of open court rooms able to hold socially-distanced trials means the backlog in cases was growing almost daily.

Now, some barristers and solicitors and those supporting victims, witnesses and defendants across Wales have warned lengthy waits could see cases collapse.

They fear criminals who may have been convicted at trial could walk free as witnesses and victims lose faith, while innocent defendants could spend years – sometimes in custody – waiting to have their names cleared.

James Rossiter, of the Criminal Bar Association (CBA), said: “Delays are going through the roof, there is a risk in rape cases that complainants will give up and walk away.

“I’ve heard that this is already happening, people are wanting to get on with their lives.

“It is impacting everybody, defendants’ lives are on hold. It’s not great for justice, it means that people who might have been convicted will walk free and could harm someone else.”

So what’s the issue?

Jury trials across England and Wales were halted at the end of March, as the pandemic hit, with almost half of courts shut and hearings being held via video link.

But those working in the justice system say a backlog of cases existed before coronavirus, with the virus only serving to exacerbate a growing “crisis”. 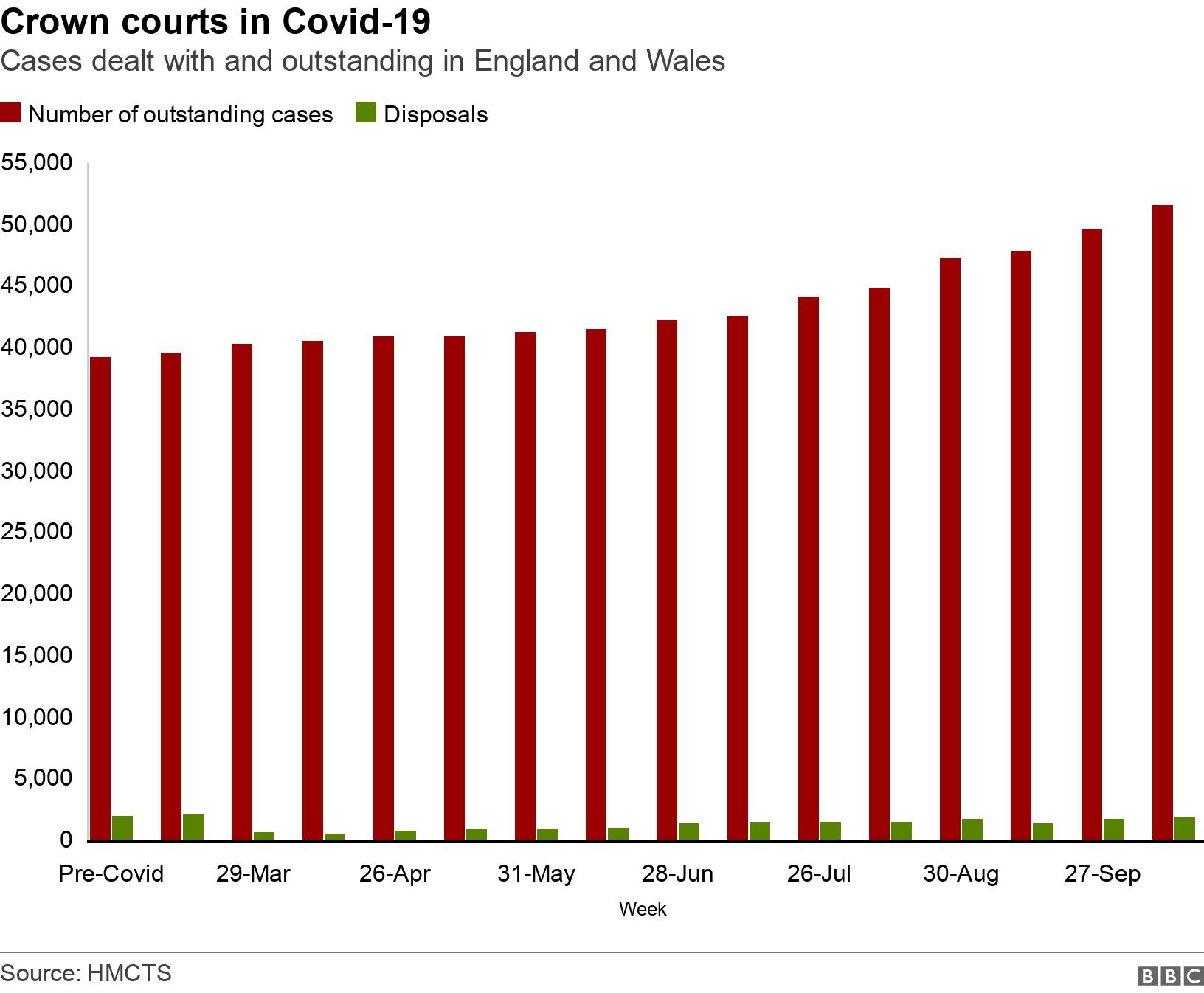 In February, more than 9,000 cases were being brought before crown courts for hearings and trials, but judges were only able to dispose of around 8,400, while in the last week before lockdown 292 trials were delayed.

The CBA, which represents barristers in England and Wales, said budget cuts leading to court closures, usable court rooms remaining shut and a lack of staff led to cases piling up in recent years.

In May, the first jurors were sworn back in at Cardiff Crown Court as jury trials resumed.

But like most aspects of life, the court system had to adjust.

One of the major challenges of clearing the backlog during the pandemic is making sure no-one comes into contact with anyone with coronavirus.

Major efforts have been made to make courts safe, with glass screens installed in over 400 courts and jury deliberation rooms, with over 250 courtrooms assessed as “capable and able to hold trials”, HM Courts and Tribunals said.

The use of video links is also helping, with new video technology being used for 70,000 hearings in magistrates’ and crown courts during the pandemic.

image captionIn Scotland, jurors have heard trials from cinemas – with the most-serious criminal cases streamed live via video-link onto the screen in a bid to clear their backlog.

Jury trials in England and Wales involve 12 jurors, court staff, barristers and legal teams, and while some can give evidence via video link, many still need to attend court.

“If one person goes down the whole thing collapses,” Chris Bowden, a solicitor in Cardiff and Newport, said.

In England and Wales, 16 temporary courts – known as Nightingale Court buildings – were opened to free up court rooms for trials needing cells and secure docks.

Only one is currently operating in Wales, in Swansea, and the CBA said, with few courts acting at capacity, at least 60 extra criminal court rooms would need to be opened to deal with the rising cases.

“The government assured us we would have over 255 court rooms ready to hear trials, which were secure, safe, but that is nowhere near enough,” Mr Rossiter said.

Some courts have trialled extended opening hours, and HMCTS wants to extend this to crown courts as officials tackle the backlog.

But Mr Rossiter warned this move would be against the human rights of advocates and would discriminate against those with caring responsibilities, as well as causing issues for witnesses, defendants and court staff.

Since March, the backlog of cases has widened, with hundreds of trials being pushed back every week.

In the last week of October, just 99 crown court trials took place across England and Wales, while 465 trials were postponed.

The CBA estimates at least 120 “multi-hand” trials are sitting in the system without a date. These are known as “orphaned trials”.

“It means the date given for some of the bails are unacceptable, we are seeing people being given provisional trail dates for late 2022 and 2023, for offences that might have happened two or three years ago,” Mr Rossiter said.

“There is a bigger risk of people getting anxious, or being intimidated the longer you wait. There are greater risks of self-harm. It is miserable.”

However, where additional courts have been sitting on a Saturday, HMTS said it had been “consistently completing more cases than they received” and the case load was falling.

‘Don’t give up hope’

image captionAlice says she was prepared to go to court to face her attacker, but had a victim impact statement read out speaking of the trauma he had caused

In February, Alice – who is partially sighted – was attacked by a stranger and dragged along a crowded street in south Wales.

Her attacker only fled when a woman stopped her car and challenged him.

Alice (not her real name) did not want to contact the police, having not being believed by officers in the past, but after approaching Victim Support for help she reported the hate crime.

“It was clear when he grabbed me he wasn’t trying to rob me, he really wanted to hurt me. I believe that it could have been death,” she said.

The man was identified but Covid-19 complications and a skipped court date led to delays. However, he eventually admitted common assault by battery and was jailed for 12 weeks.

While Alice believes she was lucky not to have faced a lengthy wait, she has been left traumatised and shaken by the attack.

“He may be free now, but I am still suffering,” she said.

Alice said she she was speaking out to encourage others not to lose hope in the system.

“Don’t give up hope, sometimes justice does prevail, you will get through it,” she said.

‘People are locked up for 22 hours a day’

On four occasions, Scott Bowden’s client packed a bag and said goodbye to his family, ready to go to prison.

But each time the man, who was arrested in December 2018 for supplying Class A drugs and waited 22 months to be sentenced, had his case adjourned.

He was eventually given a suspended sentence due to the impact of the delays, which the judge said was a form of punishment.

“Some people are waiting so long, by the time they get to court they have pretty much had a mental breakdown,” said Mr Bowden, a solicitor in Cardiff and Newport.

Mr Bowden, of the Criminal Law Committee, said with only four courtrooms able to run trails at Cardiff Crown Court, cases were being pushed back months.

“It’s chaos, there are cases being moved left, right and centre.”

During the pandemic, the UK government extended the amount of time a defendant could be held in custody before trial, from six to eight months, before applications have to be made to extend the time in custody if the trial is delayed.

And with less people going to trial, the number of people in prison who are yet to be convicted is growing.

By September, the latest data available, the number of people in prison on remand – either awaiting trial or sentencing – had reached 12,274, equating to around one in six prisoners, the highest level since 2014.

Meanwhile, the number of prisoners serving sentences has fallen below 62,000, a 10% fall since 2019. As less people are being sentenced.

“People can serve two years on remand, that’s the equivalent of a four-year sentence,” Mr Bowden said, adding the prisons were on lockdown with people confined to their cells for all but two 45-minute slots a day.

“They could be in custody for eight months and be acquitted. There are defendants who know their cases will take 18 months and are taking a chance the witnesses will just give up.

“A few weeks ago, they had a whole wing in isolation in Cardiff prison, it meant none of the defendants could go to court, we couldn’t have conferences with them.

“It is a crisis. If we want it to work it needs investment, we are now at a breaking point,” he added.

‘People are suicidal, they have nowhere to turn’

Those accused of a crime are waiting longer and longer for their day in court, to clear their name or to be convicted.

Now a couple, who were both wrongly accused, have set up a charity which aims to help defendants and their families left in “limbo” as cases drag on.

Liam Allan, who was falsely accused of 23 counts of rape and sexual assault as a student, and Hannah Arkwright, set up the helpline during lockdown.

Ms Arkwright said a lot of defendants were being given trial dates that were years away, and many were feeling suicidal, isolated and alone.

“We get a lot of people feeling like there’s never going to be an end,” she said.

“Once you’ve lost your job, your family, your friends, so what’s the point anymore… people have no where to turn.”

Ms Arkwright said, once arrested, there was little people could do but wait to be charged. Once charged, they had to wait for their day in court.

“One friend’s case was postponed for two weeks because they had to air jury bundles, they need to print them off 24 hours beforehand and air them,” she said.

“Someone I know was meant to have his trial in March and it’s now been pushed back to September 2022.

“It’s impossible not to think about it, you are constantly thinking, ‘there’s no point me doing this because I might spend years in prison’. Even before people have been charged, they have literally lost everything.”

What do those in charge of courts say?

A HMCTS spokeswoman said the backlog in magistrates’ courts was continuing to fall and the number of cases resolved in crown courts had increased since April.

“To drive this recovery further we are investing £110m in a range of measures to boost capacity, including recruiting 1,600 new staff and shortly opening several more Nightingale Courts,” she said.

“These efforts will be bolstered by an extra £337m the UK government is spending next year to deliver swifter justice and support victims, while £76m will further increase capacity in family courts and tribunals.”

Scroll for more
Tap
data-ad-format="auto">
Newspaper headlines: Christmas plans warning and ‘IT chaos’ hits vaccines
Newspaper headlines: ‘Hours from a no deal’ and Tory grandee ‘fury’
We use cookies to ensure that we give you the best experience on our website. If you continue to use this site we will assume that you are happy with it.Ok