Coronavirus: Can this California prison save itself from Covid-19?

Coronavirus: Can this California prison save itself from Covid-19?

California’s San Quentin State Prison had zero coronavirus cases, until an inmate transfer in May sparked one of the worst outbreaks in the state and the country. Authorities are now scrambling to contain it.

On a typical morning, Jack Walter, 54, begins his day by going for a walk in the yard. At San Quentin State Prison, he and the roughly 3,500 other inmates share the communal outdoor space. “Four laps is around a mile,” Jack said. “I walk about three miles and talk to the fellas.” A short while later, Jack begins his work in the prison’s canteen, a privilege he earned during his 24 years behind bars.

Even as the coronavirus outbreak ravaged California this spring, Jack’s routine remained largely unchanged. Despite fears about virus spread in prisons, as late as May San Quentin had no reported cases. But in the last days of the month, 121 inmates from the California Institute of Men in Chino – then in the throes of its own outbreak – were transferred to San Quentin. Many of the men had not been tested for weeks prior to the move, state officials later confirmed, and the transfer sparked an outbreak that swept through more than one third of San Quentin’s inmate population.

There have now been at least 2,159 confirmed cases of Covid-19 at San Quentin and 19 deaths. The prison, which sits in Marin County, 30 minutes north of San Francisco, is home to one of the worst outbreaks in the state and country.

On 6 July, about a month after the outbreak began, the state’s most senior prisons medical official, Dr Steven Tharatt was fired. Later that month, all transfers to or from San Quentin were suspended indefinitely.

Prison authorities didn’t test the prisoners before the transfer, according to Marc Levine, a California assemblyman for Marin County. “This ended up being the worst prison health screwup in the state’s history,” he said.

A spokeswoman for the California Department of Corrections and Rehabilitation (CDCR) declined to comment on the transfer.

Now, Jack’s morning ritual has been upended. Inmates at San Quentin are largely limited to their cells, with the exception of communal showering. In an attempt to curb the spread of infection, the prison’s yard is populated with tents that function as makeshift treatment sites.

Jack, who is serving a 27-year sentence for possession of a firearm, is locked in with a cellmate who recently tested positive for the coronavirus. After three tests, he said he was still “blessed” to be negative. “But they still locked us in this cell together,” he said.

Four days later, a fourth test revealed Jack had contracted Covid-19. His wife, Teresa, 52, was distraught. “I just feel like screaming,” she told the BBC. “They never moved his celly to the tents.”

The speed with which the virus moved through San Quentin – the oldest prison in California – was exacerbated by the facility’s swollen inmate population and decrepit infrastructure, said Dr Brie Williams, a professor of medicine at the University of California San Francisco and the director of Amend, and advocacy group that works with prisons on public health problems.

“People are living in often unsanitary conditions, often in very old buildings that have poor ventilation,” she said. “These things in general are bad for health but when you put these against the backdrop of an emerging pandemic, a respiratory pandemic, then these problems become lethal.”

Dr Williams was one of seven health experts to visit San Quentin in June, at the onset of the outbreak. The team wrote a nine-page memo in which they praised the prison’s physicians and healthcare staff but warned that the facility had “profoundly inadequate resources”, with “dire implications for the health of people incarcerated at San Quentin”.

In the unit that housed the transferred inmates, the “fear and outrage” among the prisoners was “palpable”, the memo said, with men heard “yelling throughout the housing unit due to discontent about the Covid-19 situation”.

The BBC spoke to several family members of incarcerated men, who expressed concern after speaking with their loved ones in San Quentin.


“You just hear the alarms and ‘man down’ in the background,” said the wife of an inmate on death row.

The anxiety among inmates was as endemic as the virus, Jack said. “You see people that are sick, but a lot of them don’t want to say they’re sick.” He said that some inmates concealed their symptoms after hearing rumours that they might be placed in solitary confinement.

California Department of Corrections spokeswoman Dana Simas said in an email that San Quentin was “following isolation and quarantine protocols as recommended by the Centers for Disease Control and Prevention”. She declined to comment on protocols for the newly infected, but referred to San Quentin’s coronavirus response website, which said that areas of the prison had been designated to isolate infected inmates and those who had exposure to the virus.

According to Dr Williams, the health risks inside are aggravated by San Quentin’s aging architecture. The nearly 170-year-old prison still houses some men in units built in the 19th Century. In two of the cell blocks, both with a capacity of 800 people, there are five floors of cells – 5ft by 11ft – typically home to two inmates. These cells have open-grills, meaning the men are held behind bars instead of a solid door.

“So what you have in this particular building is hundreds of people stacked in rows above each other with open bars where everyone is sort of breathing out into a common atrium,” Dr Williams said. “People are yelling, or talking or interacting through the bars through the unit and the respiratory droplets are basically just existing in this open atrium.”

And ventilation inside the prison was “exceedingly poor”, the team found, with windows welded shut and fan systems that appeared to not have been turned on in years.

There are more than 104,000 people behind bars in California’s 35 institutions, and roughly 2.3 million people locked up across the US. Per capita, the US has more citizens behind bars than any other country. 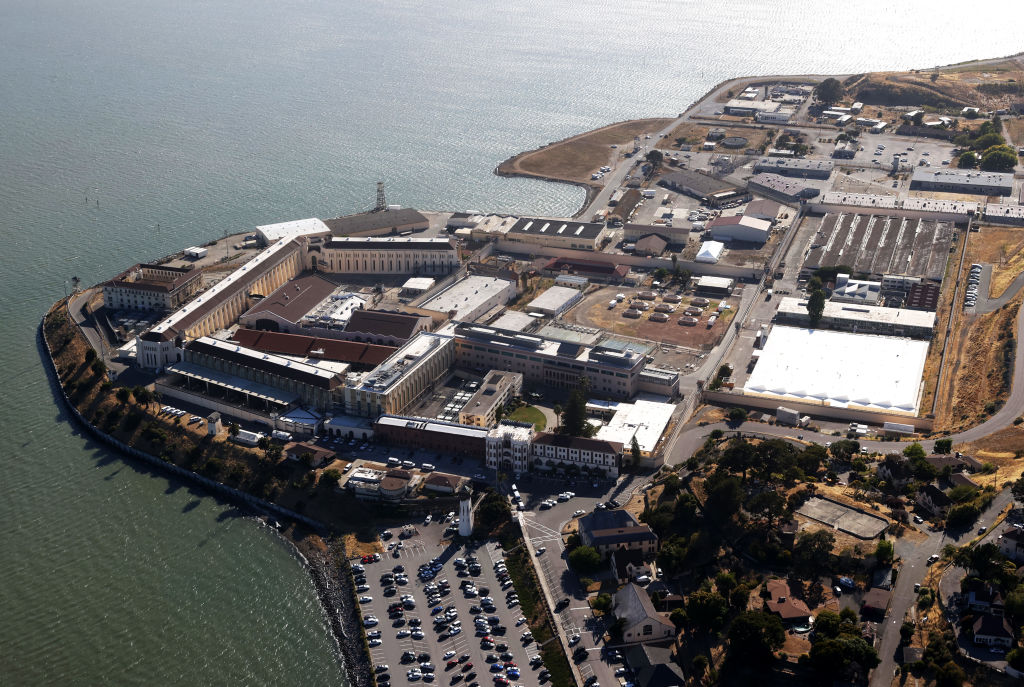 More than one-third of inmates infected

This month, in an attempt to curb prison outbreaks, California Governor Gavin Newsom announced that approximately 8,000 inmates across the state could be eligible for release by the end of August. The releases will occur on a rolling basis and will include those most vulnerable to health risks and those with less than a year to serve on their sentence. Sex offenders and those incarcerated for violent crimes and domestic violence will not be eligible.

The announcement follows a series of measures taken by state authorities which reduced the prison population by roughly 10,000 since March – including the expedited release of roughly 3,500 inmates and the suspension of intake from county jails. But some lawmakers and prison reform advocates say this number includes approximately 3,000 individuals who are already due for release each month.

“I think that’s another piece that the public doesn’t understand: how many bodies churn in and out of cages, whether its jails, prisons or detention centers on a daily, weekly, monthly basis,” said Emily Harris, policy director for the Ella Baker Center for Human Rights.

The promised releases this summer also fall roughly 10,000 short of the number of releases needed to reduce prison capacity to 100%. All together, California’s prisons are operating at roughly 120% design capacity.

Ms Simas said in an email that this number was “well below” a 2010 court order to address medical care within the state’s prisons, which required the CDCR to reduce its incarcerated population to less than 137.5% of design capacity. She did not respond directly to questions about any state efforts to further decarcerate prisons.

At San Quentin, the current prison population makes recommended social distancing impossible, Dr Williams said. She and other health experts are calling for dramatic reduction at the facility – cutting capacity by 50%.

“The first, most important thing to protect the health and lives of people incarcerated is to decarcerate as many people as possible,” she said.

According to prison reform advocates, the pre-existing conditions at many California facilities made coronavirus outbreaks inevitable.

“Those of us who’ve been doing work on the conditions of prisons and jails knew immediately, once we learned about the coronavirus, that prisons and jails were just going to be terrifying places for people to be living,” Ms Harris said. “A lot of us felt a little bit like we’re at the top of a building and watching it burn from below, and just kind of waiting.”

As officials work to curb the spread, inmates say life inside San Quentin is becoming increasingly restricted. Until this week, inmates at the prison were barred from making phone calls and daily showers had been reduced to one every three days.

San Quentin was “aggressively trying to flatten the curve by eliminating all areas where infection can easily spread,” Mr Broomfield wrote to explain the changes, according to the Families Of San Quentin website, which is used by both families of inmates and advocacy groups.

“The goal is to keep the population safe, even if it means a temporary reduction in services,” he wrote.

Jack’s wife Teresa has exchanged countless letters over the years with her husband, spent hours on the phone with him, and made the 90-minute round trip to San Quentin more times than she can remember. “My husband always says that if he hadn’t gone to prison, he’d probably be dead,” she said.

According to Teresa, Jack has used his prison sentence to lay the foundations for a life beyond incarceration – from completing his General Education Diploma to taking anger management workshops. The couple have plans to start a janitorial business together upon his release. “He has a house, loved ones, and all the tools to be a productive citizen,” she said.

At a glance, Jack seems like a good candidate for Governor Newsom’s latest wave of releases. But with two and a half years left he falls short of the CDCR criteria, which begins with those with fewer than 180 days left to serve, before looking to prisoners with up to a year of their sentence remaining.

When he spoke to the BBC, Jack was still hopeful about an early release. For now, he will run the course of his coronavirus infection with his cellmate, waiting for news and trying to stay healthy in a place where there are no guarantees you can.

Some names have been changed

Scroll for more
Tap
data-ad-format="auto">
Republicans introduce $1tn pandemic recovery plan
US presidential debate moved amid virus fears
We use cookies to ensure that we give you the best experience on our website. If you continue to use this site we will assume that you are happy with it.Ok