Firearms police were sent to everyday incidents which did not require an armed response more than 5,000 times in the past year, BBC Scotland can reveal.

Police Scotland’s firearms officers were banned from attending such routine calls until last May.

Since then they have dealt with more than 5,250 routine incidents like car crashes and missing people.

Critics say the figures are alarming but the force insists its officers are saving lives.

“Overall they’re providing a higher level of service – and more quickly – to the public.”

Firearms officers are equipped with a handgun and a Taser, which they carry while attending routine incidents.

They also have access to a semi-automatic G36 carbine rifle, which can be deployed during firearms incidents, and a launcher for baton rounds – sometimes called “rubber bullets”.

Figures obtained by BBC Scotland’s The Nine reveal that the specialist skills of armed officers have been required at 5,140 incidents since last May.

The remainder were incidents where an armed response was not required but another specialism, such as deploying a stinger, may have been needed.

More controversial were the thousands of deployments to routine incidents where there was no need for an armed officer. 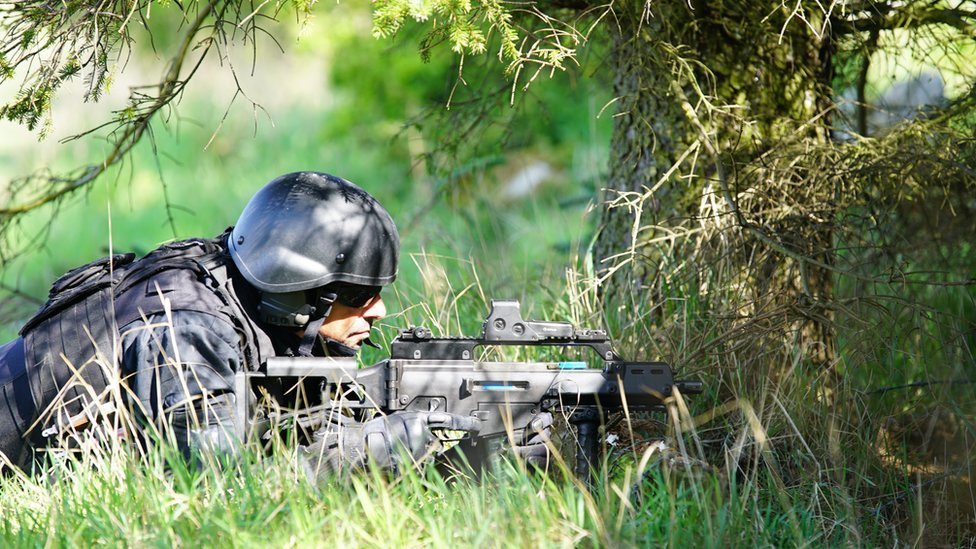 Green MSP John Finnie is a former police officer who served in the Northern Constabulary and Lothian and Borders forces for more than 30 years. His constituency was one of the first in Scotland where armed police were routinely deployed.

“I think it’s very significant that 5,000 incidents which did not require an officer to be armed had nonetheless officers turning up fully equipped with firearms,” he said.

“That’s 5,000 members of the public who have been confronted – albeit they would welcome the police officer being at the scene – by somebody who was armed who didn’t need to be armed.

“The people who are deployed with firearms are highly-trained individuals – the challenge is always going to be that if an officer has a Taser they’re perhaps more likely to use it.”

He added: “For over 10 years I was a police dog handler and that’s the argument – should you be dealing with routine road traffic offences?

“Every police officer has the same obligation – that’s to protect life and property – and no one, least of all me, is going to suggest that an armed officer should drive past an incident.

“I don’t doubt for one minute that Police Scotland are acting in good faith, but it’s a very difficult situation to not argue that this is normalising the routine patrolling of armed police officers.

Mr Richards said the use of firearms was always a “last resort”, adding that in his experience even the presence of a Taser had “caused a huge drop in violence and in particular injuries to the public”.

That runs counter to a recent study by criminologists at the University of Cambridge, who examined police officers in London and found those visibly armed with a Taser used force 48% more than those who were unarmed. They were also more likely to be assaulted.

The Police Federation of England and Wales has challenged the study’s conclusions and Mr Richards insists they do not match the experience in Scotland.

“Certainly our findings are that where officers are deployed with that obvious a deterrent it is just that; a deterrent,” he said.

Concerns about armed policing in Scotland first hit the headlines in 2014 after officers were photographed carrying handguns on the street in Inverness.

Amid mounting public and political pressure, then Chief Constable Sir Stephen House announced armed police would only be deployed to life-threatening incidents.

That decision was overturned in May 2018, with police chiefs claiming it was necessary to protect officers in the face of increasing violence.

While violent crime in Scotland has halved over the last decade, Police Scotland claims assaults on officers have risen.

There is widespread support for armed policing among rank-and-file officers in Scotland.

A 2017 survey by the Scottish Police Federation found two in three officers wanted to carry a gun. Nine in 10 said the same for Tasers, which were given to 500 frontline officers last year.

However, Mr Richards insisted Police Scotland has “no plans to expand armed policing”.

“We aren’t a fully armed force – nor do we intend to be,” he added.

“We understand that the appearance of a weapon on the street can cause some consternation and apprehension, but our officers are highly trained, extremely experienced and able to discharge their duties on a day to day basis without resorting to firearms in the vast majority of cases.

“It’s simply another bit of equipment we can refer to if need be.”

Scroll for more
Tap
data-ad-format="auto">
Fraudsters ‘stole £7m’ from holidaymakers in 2018
Plain-clothes police cyclists target ‘too close’ drivers
We use cookies to ensure that we give you the best experience on our website. If you continue to use this site we will assume that you are happy with it.Ok